Let’s face it, most of us want bigger, more defined muscles, and the way we’re going to get them is through top quality hypertrophy training! We need to stimulate those muscles to grow through the process of overcoming resistance.

We need to force the body’s muscular system to adapt (More on all that science stuff later!)  It is this adaption that will increase the size and improve the appearance of your muscles like no other form of training.

So if you’re ready to start making some serious progress in the gym then you’d better read on.  You’ll learn not only the science behind the hypertrophy, but also exactly how to apply that science within your own training right down to a weekly routine guaranteed to help you pack on lean muscle and size.

The Science Behind hypertrophy Training.

Hypertrophy training to add size and strength to muscles is a practice dating back literally thousands of years in the fields of warfare and sports.  King’s wanted stronger warriors and nations wanted stronger fighters.  Lifting weights in order to get bigger was part of those cultures.

Even as early as the 2nd century Romans were using ‘Halteres’, a seriously old-school form of dumbbell.  Hypertrophy training today builds on this history, but with gets rid of all that messy warfare stuff!

Bodybuilding for instance started slowly at first but seriously took off following the 1960’s and 70’s, particularly after the prominence of bodybuilding legend Arnold Schwarzenegger.  Hypertrophy training today is aimed explicitly at increasing muscular size, with increases in strength and fighting skills taking a backseat.

It is also worth noting that hypertrophy training today is also used to refer specifically to the method of HST, or Hypertrophy Specific Training. HST began in the year 2000 when Brian Haycock published an article in the ThinkMuscle newsletter.  Being the natural conclusion of the bodybuilding search for perfect hypertrophy, it is a set of training guidelines aimed at maximizing muscular size development.

Hypertrophy training works on three rules, these being mechanical load, chronic stimulation and progressive loading.  Although these terms sound complicated, they boil down to creating tension in your muscles, creating that tension quite frequently, and increasing that tension when the body starts to adapt to it.  The end result is both sarcoplasmic and sarcomere hypertrophy.  (For sarcoplasm read ‘fluid’, and for sarcomere read ‘contraction’ fibers)  In bodybuilding circles sarcoplasmic or ‘fluid’ hypertrophy is the number one goal.

This is because it is a much faster way to add size than waiting for those sarcomere ‘fibres’ to grow.  The downside of this is that since sarcoplasm ‘fluid’ doesn’t contract, the added muscle size will not necessarily result in any significant increases in strength or performance.  With that said, unless you’re an athlete you’re probably just aiming to look good, and hypertrophy will do just that!

You may be thinking, ‘why do my muscles actually grow?’  The truth of this question is that there is no single right answer.   There are actually multiple theories that don’t always agree with one another.  These theories range from muscle hypoxia (oxygen restriction) through to increased protein synthesis, better activation of ‘satellite cells’ and a whole range of suggestions in between.

Fundamentally muscular hypertrophy is a consequence of your body adapting to the demands it is given.  Most importantly you should remember that hypertrophy is not a direct result of training, rather a result of adaption to that training.  This means that giving the body a sufficient amount of time to recover, repair and adapt between training sessions is essential for the process of hypertrophy to work.

The main benefit of hypertrophy training is that it increases muscular size and gives what many people would call an athletic or attractive physique.  This in itself can increase confidence and make the training worthwhile.  Even better is that there are a whole range of other benefits to be gained through hypertrophy training.  Like any weight training or load bearing exercise hypertrophy training will serve to increase bone density and counter the issues of osteoporosis commonly seen as people age.

Resistance training of any sort will also assist in the maintenance of basal metabolic rate and the reduction of body fat percentage.  This in turn helps with combating obesity and diabetes.  Additionally training has been shown to reduce bad LDL (Low density lipoprotein) count and to increase good HDL (high density lipoprotein) count.  For more information about these benefits check out the study below, that has been officially endorsed by the American College of Sports Medicine (ACSM)

American Heart Association Science Advisory, Resistance Exercise in Individuals With and Without Cardiovascular Disease: Benefits, Rationale, Safety, and Prescription An Advisory From the Committee on Exercise, Rehabilitation, and Prevention, Council on Clinical Cardiology

Importantly, the benefits hypertrophy of training need not be restricted only to those in good health.  It can also be significantly beneficial in the rehabilitation of patients with coronary disease.

An important study undertaken by numerous members of the US Public Health Service in 1995 analysed a dozen separate studies into the effects of weight training and found that there were significant health improvements across each study, and that no studies had reported any issues such as non-normal hemodynamics, angina symptoms or ventricular dysrhythmias.  It is also worth noting that the resistances used varied from around 20 to 85% of the subject’s one repetition maximum.  For further reading check out:

Ok, so studies into health benefits are all good, but what about a study into actually building muscle, will this type of training really work?  Luckily, a study by Dr Abe of Tokyo Metropolitan University says that it does.

The study looked at three men aged 20-21 who had previously never undertaken resistance training.  The men exercised three times each week for sixteen weeks using a full body workout.  Each session would consist of five exercises between the ranges of 8-12 repetitions, and the resistances used were increased across the sixteen weeks.  On average (results varied per person) the group of men increased their strength by 23%, and added 3.4kg of lean muscle.  They also, on average, reduced their body fat percentages by 0.6%.  To summarise then, hypertrophy based training will make you stronger, more muscular, and even leaner.  If you want to read a little bit more about the study check out:

Applying hypertrophy style training in the gym is actually a very simple process, and more often than not most guys in the gym will be following a programme of this sort (even if they don’t know they are!) The general rule for applying a hypertrophy workout is to perform 8-12 repetitions of an exercise at around 70% of your one repetition maximum.

There are numerous approaches to dividing your programme, but two of the most common methods used are full body training and split training.  Full body programmes do exactly what they say on the tin and target your entire body in a single workout.  Split programmes, also as their name would imply, split your programme into multiple body parts that are trained on different days. 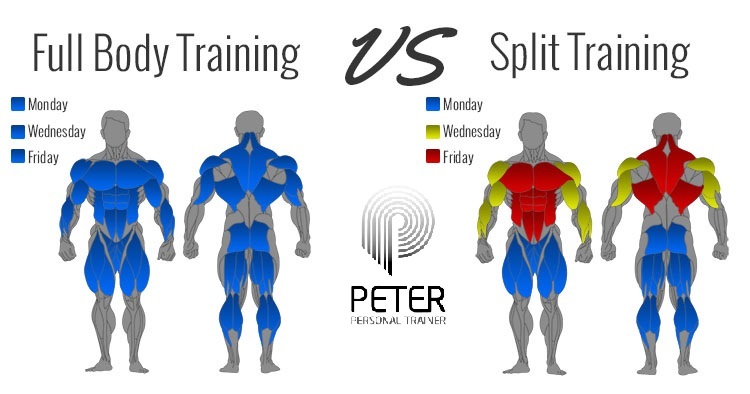 Full body programmes, by their nature, will have to allow only a limited number of exercises for each body part in order to fit everything into a single workout, whereas split workouts can devote multiple exercises all to the same muscle group.  Across a week, however, full body programmes allow for muscles to be trained multiple times, whereas split programmes have you training each muscle only once per week.  In this sense each approach has both its advantages and disadvantages, and people have had success using both methods.

The workout presented at the end of the article offers a balance between these two approaches, giving a mixture of both training frequency and training volume.

To give very basic examples of both programmes, a full body programme consisting of squats, chest press and barbell rows could be completed three times per week.  Alternatively, a split programme could dedicate one day to legs, another to chest and another to back.  The most common body part split is chest and triceps/back and biceps/legs and shoulders.

All you’ll need to get started is access to some resistance (whether in the form of free weights or machines) along with a good supply of sports clothing and plenty of new T-shirts to grow into!

And don’t forget, although your training is important, you won’t get anywhere without plenty of food  and sleep to help your body repair itself and build those bigger muscles.

*The repetitions are lower for the deadlift as you will be using a greater percentage of your one rep maximum.  Moreover, the exercise is very physically demanding and requires a large amount of attention in order to maintain correct form.  After multiple repetitions form commonly begins to deteriorate.  Plus, the spinal erectors and hamstrings typically respond better to low repetitions with higher intensities.

**Don’t worry if you can’t do 8-12 reps, just do as many as you can manage.  If you can do more than fifteen then you should start to add some weight, preferably using a weight belt.

Follow this basic programme and make sure to eat plenty of food alongside it, your body will need those calories in order to recover and grow.  Also remember that you will need to follow the process of progressive overload, i.e. adding more stimulus when your body has adapted to its current stimulation level.

As a general rule for this programme, when you can perform more than twelve good quality repetitions it is time to increase the resistance.  Follow this rule and you’ll be on the fast route to significant gains in size and strength.

Ask me absolutely anything, I bet i can answer it. Try Me! 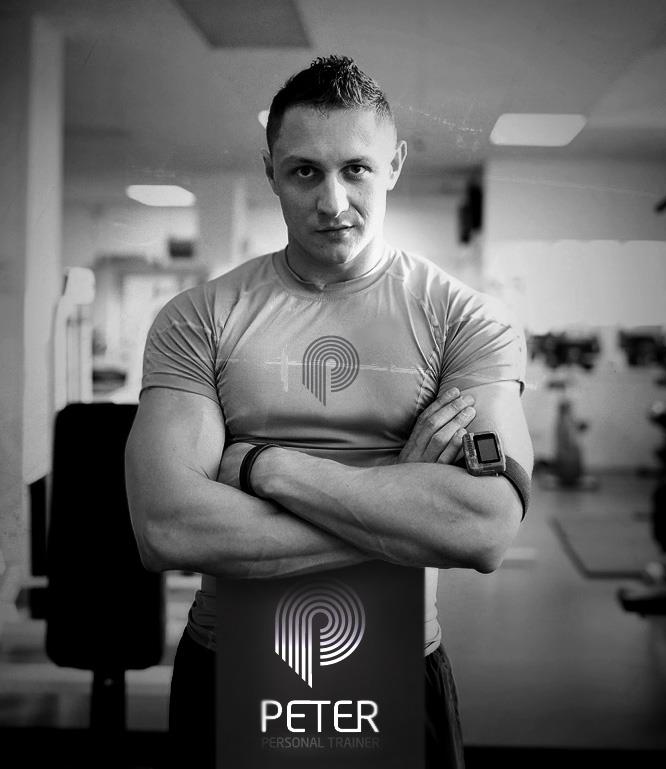